Bike Safe is very pleased that some key links in the PBN will be funded to the tune of $4.7m. This is a huge win for the community! Bike Safe first proposed the idea of a Barwon to Bay Cycleway as per our illustration below in 2014. After much work, by many people, the State Government, TAC and City of Greater Geelong will make it a reality. Below is the official press release. 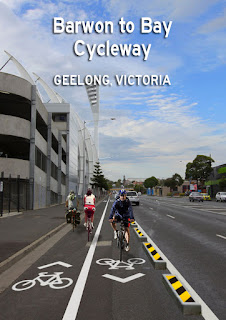 Christine Couzens MP Member for Geelong  December 20, 2017
MAKING IT SAFER AND EASIER TO GET AROUND GEELONG
The Andrews Labor Government is building new cycling routes and upgrading the Geelong CBD to make it easier and safer to get around the city.

Member for Geelong Christine Couzens joined the City of Greater Geelong, Transport Accident Commission (TAC) and VicRoads today to announce the $7 million package of works, which will help to boost tourism and reduce congestion on local roads.

Two new cycling routes will be constructed from central Geelong to Herne Hill and Waurn Ponds, connecting with current paths in the network.

The routes will be built in line with international best practice and will include a combination of protected bike lanes – where bikes are separated from cars.

As part of the Towards Zero 2016-2020 Road Safety Strategy and Action Plan, the Victorian Government is investing $100 million through the TAC to create safer roads for cyclists and pedestrians. Over the past five years, 30 per cent of the 156 crashes across central Geelong involved people walking and riding their bikes.
In January, the City of Greater Geelong will roll out a public consultation program to share the proposed plans for the cycling routes, understand the community’s ideas and collect feedback.

Project plans and surveys will be available at Council customer service centres in early January.